Brandon Ballengée (American, born 1974) is a visual artist, biologist and environmental educator based in Louisiana.

Ballengée creates transdisciplinary artworks inspired from his ecological field and laboratory research. Since 1996, a central investigation focus has been the occurrence of developmental deformities and population declines among amphibians. In 2001, he was nominated for membership into Sigma XI, the Scientific Research Society. In 2009, Ballengée and SK Sessions published “Explanation for Missing Limbs in Deformed Amphibians” in the Journal of Experimental Zoology and received international media attention from the BBC and others. This scientific study was the inspiration for the book Malamp: The Occurrence of Deformities in Amphibians (published by Arts Catalyst & Yorkshire Sculpture Park, UK) and a solo exhibition at the Royal Institution of Great Britain (London, England: 2010). From 2009 through 2015 he continued his amphibian research as a Visiting Scientist at McGill University (Montréal, Canada) and, in 2011, he was awarded a conservation leadership fellowship from the National Audubon Society’s TogetherGreen Program (USA). In 2014 he received his Ph.D. in Transdisciplinary Art and Biology from Plymouth University (UK) in association with Zürich University of the Arts and Applied Sciences (Switzerland). In 2015, he was the recipient of a fellowship from the New York Foundation for the Arts (NYFA).

Currently, he is a Postdoctoral Researcher in the Biological Sciences Department at Louisiana State University (Baton Rouge, Louisiana), studying the impact on fishes from the 2010 Gulf of Mexico oil spill. His project, Crude Life Portable Museum: A Citizen Art and Science Investigation of Gulf of Mexico Biodiversity after the Deepwater Horizon Oil Spill, is ongoing thanks to an Interdisciplinary Projects Grant Award from the National Academies Keck Futures Initiative (NAKFI), a project of the National Academies of Sciences, Engineering and Medicine.

Ballengée’s artwork has previously been exhibited throughout the USA and internationally in more than 20 countries, including Canada, Argentina, England, Germany, Italy, Spain, Slovenia, Russia, India, China, South Korea and Australia. In the summer of 2013 the first career survey of Ballengeé’s work debuted at the Château de Chamarande (Essonne, France), and travelled to the Museum Het Domein (Sittard, Netherlands) in 2014. A mid-career retrospective of his work opened in the fall of 2016 at the University of Wyoming Art Museum (Laramie, Wyoming), which will travel to the Rowan University Art Museum (Glassboro, NJ) and the Acadiana Center for the Arts (Lafayette, Louisiana). 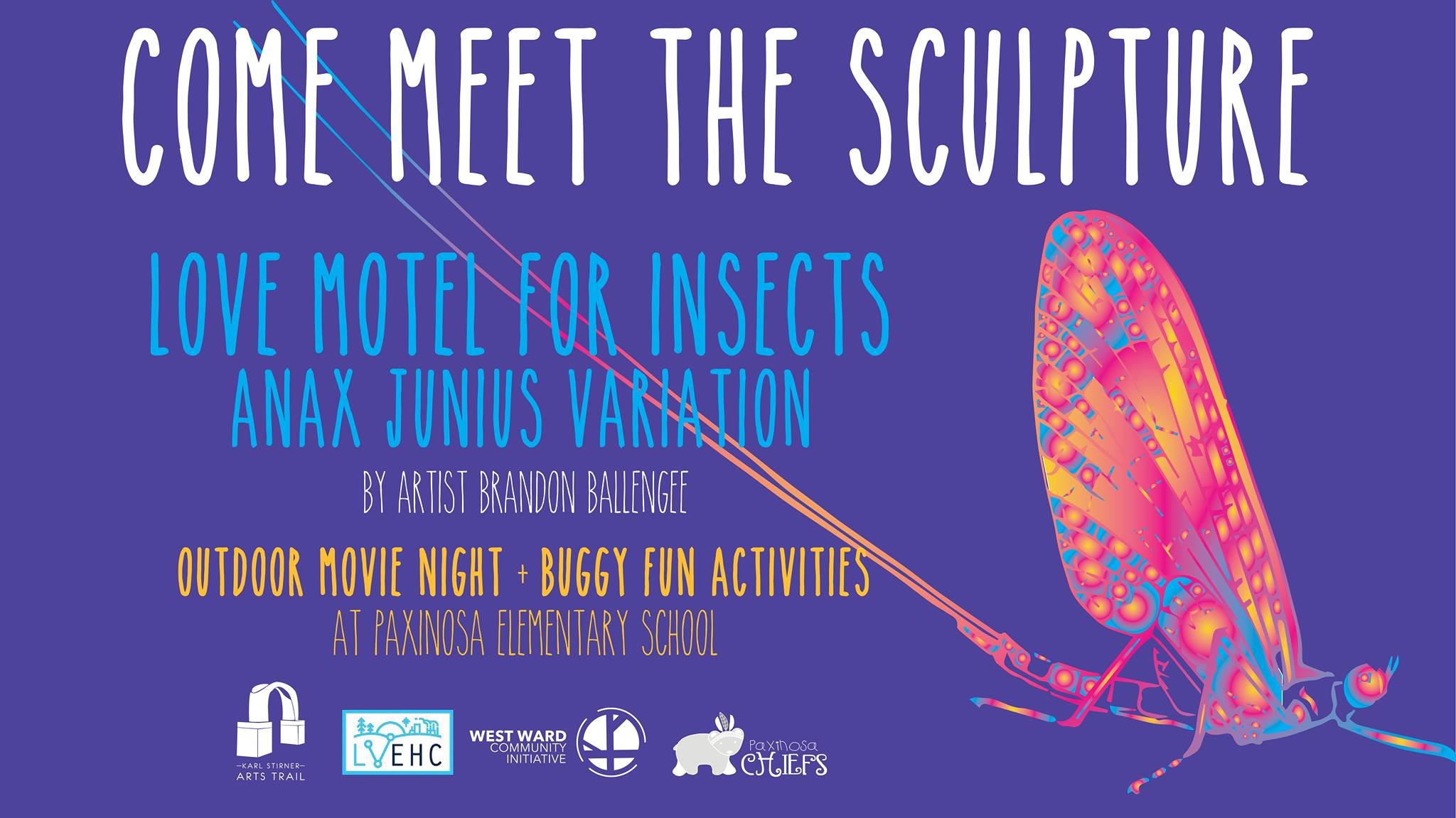 Come celebrate our environment and the bug life in Easton and welcome the “Love Motel for Insects” sculpture by Brandon Ballengee to the neighborhood. During the evening hours, the 15′ sculpture uses black lights to attract insects to the installation, letting you get an up-close look at another world living around you. Nurture Nature Center will be on hand with a glow-in-the-dark activity on bugs. Stay for the FREE outdoor movie, “A Bug’s Life” on the big screen. Remember to bring your blankets or some chairs and join us on the front lawn for the event. Movie begins at 6:45pm. Free popcorn by Easton Police Department

Join the KSAT as we welcome the newest installation on the trail:

This installation is part of the Lehigh Valley Engaged Humanities Consortium Mellon grant. We invite you to engage and learn more about the piece and it’s significance on the trail starting Sept. 6 through Sept. 10. See the event schedule below or click on the poster to go to the event page:

Learn more about the Love Motels for Insects Series