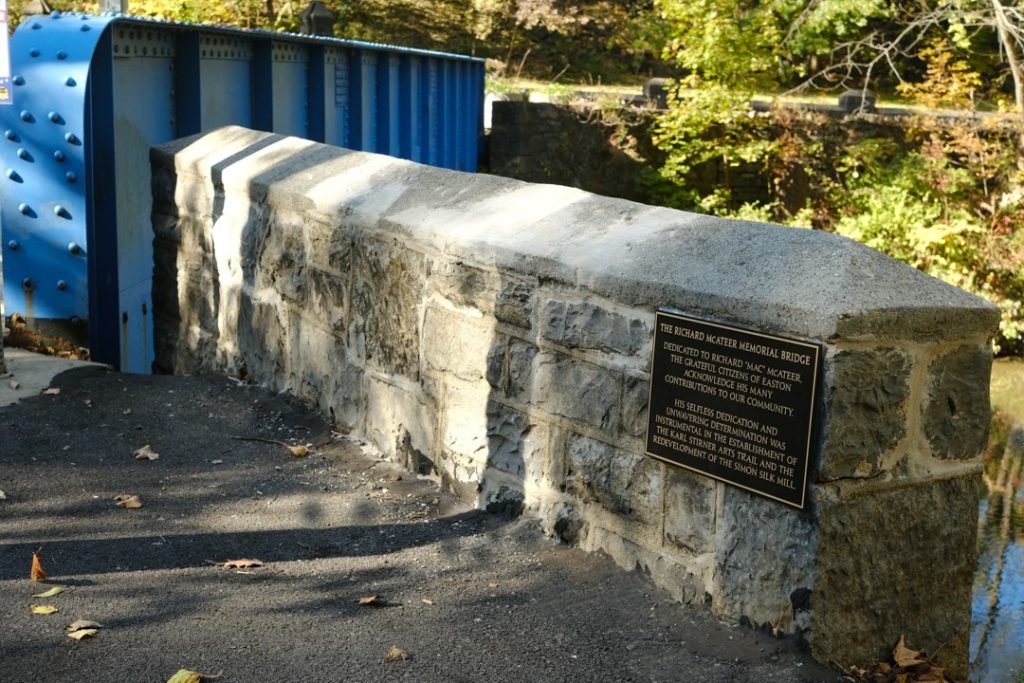 Richard McAteer was an Easton community advocate and leader credited with the idea of featuring art in the planned recreational trail along the Bushkill Creek, which became the Karl Stirner Arts Trail (KSAT). On Oct. 19, 2022, community members dedicated the Richard McAteer Memorial Bridge (formerly known as the “blue bridge”) to honor his contributions to the KSAT and Easton community, which included chairing the Easton Development Authority and helping to found the Greater Easton Development Partnership.

The plaque at the bridge says, “Dedicated to Richard ‘Mac’ McAteer, the grateful citizens of Easton acknowledge his many contributions to our community. His selfless dedication and unwavering determination was instrumental in the establishment of the Karl Stirner Arts Trail and the redevelopment of the Simon Silk Mill.”

The Historic Easton Cemetery provides background on the McAteer Bridge:

The original entrance to the cemetery was a wooden bridge across Bushkill Creek. David Wagener also used the bridge for his farming, and he agreed to share in any repair costs. He even agreed to contribute $50 towards the construction of a new bridge, provided he and his heirs could use it.

Over the years this area was damaged by floods, necessitating the need for a new bridge. Estimated costs for a new bridge were very high. A local engineer, John McNeal, found an iron bridge in Brooklyn that was just about the right size although it did have to be cut to fit. It was owned by the United States government, but luckily for the cemetery, it was for sale and at a considerably lower cost.

The iron bridge you see today along the Bushkill Creek was put in place in 1918 and is now known as the “blue bridge,” part of the Karl Stirner Arts Trail.