Karl Stirner was born in Germany in 1924 and raised in Philadelphia, Pa. He was a World War II veteran, serving with the U.S. Army in New Guinea and the Philippines. Stirner left school at the age of 17 to study blacksmithing, metalworking, and mechanical engineering. 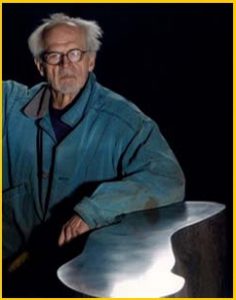 In 1983, Stirner moved to Easton and converted a former industrial warehouse and sewing machine factory on Ferry Street into the Easton Arts Building. This was his home, gallery, and studio.  In subsequent decades, he made more than 400 works in his studio, which “hummed with the work of grinders, drills, and torches.”

Observing the many empty spaces in downtown Easton, Stirner contacted Mayor Sal Panto and urged the city to promote Easton to artists. Stirner was instrumental in organizing the city’s artists loft seminar in 1985. With his encouragement, artists moved to the community, leading to a revival of Downtown Easton.

Younger artists reflect on Stirner as a “towering figure” and “an inspiring mentor.” Lehigh Valley artist Berrisford Boothe said that artists called him the “art pope” of Easton as they sought out his blessings and advice in their personal and professional lives. 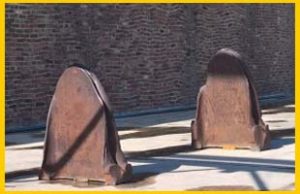 A self-taught sculptor and a natural teacher, Stirner taught jewelry making, sculpture, and painting at Tyler School of Fine Art at Temple University, the Moore College of Art, Philadelphia College of Art, and Swarthmore College. His work has been featured at nationally renowned institutions, including solo exhibitions at the Lehigh Valley’s own Allentown Art Museum, the Philadelphia Museum of Art, and the Museum of Modern Art. 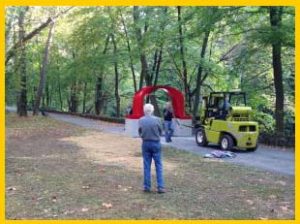 Stirner created the Untitled (Arch for the KSAT), designed specifically for its location at the trailhead to the Karl Stirner Arts Trail.

Also on the trail is Stirner’s Hounds of Hell, which uses leftover material from Bethlehem Steel.

“Karl Stirner brings new life to metal that has been discarded, whether from Bethlehem Steel, shipwrecks or from his favorite scrapyard … Stirner creates a drama of contradiction, playing thick against thin, flexible against inflexible,” writes Donald Kuspit in The Karl Stirner Catalogue.