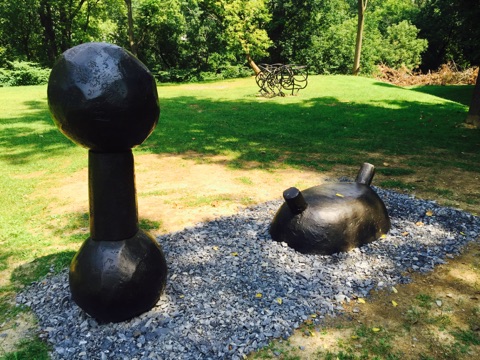 Jack & Jill was realized through Patrick Strzelec’s work on simple forms and experimenting with abstract art that referenced figures. Jack and Jill originally was designed as two separate works. A connection became evident when they were placed near each other. 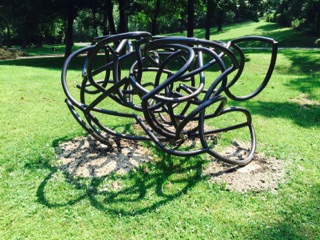 Strzelec once worked as a studio assistant for a sculptor doing steel sculpture work. This challenging job required working within the confines of a large rectangular three-dimensional steel format and using pipes and supports within this space. Strzelec found this to be confining and restricting, both in work and in form, almost like he was stuck inside. A byproduct of the sculptures were these lengths of steel that he began to craft for his own art. Jungle references tightness and frustration from the boundaries he was working in. It is also playfully linear, with people seeing the title Jungle as a reference to a jungle gym. The artist’s first works in this style were small and handheld; he later scaled them to this grander size.

A native of Chicago, Strzelec now lives and works in Carversville, Pa. He likes to work on a scale that is comfortable for his stature. Rather than laboring on oversized pieces, he feels more connected to the creative process this way, seeing his process as an extension of himself.